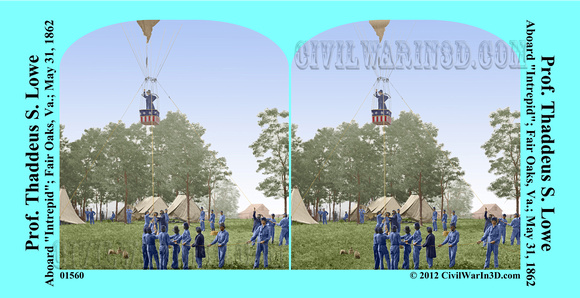 While today when we contemplate observation balloons during the Civil War we think of Professor Lowe, he had did have competition. John Wise, John LaMountain, and brothers Ezra Allen and James Allen all competed with Lowe for the position of Chief Aeronaut. All of them had ballooning experience prior to the war and it was not entirely clear who should be appointed to the position.

John Wise had been producing and flying balloons since 1835. He had even created a balloon that if punctured, would collapse into a parachute to allow the balloonist to survive. In 1838, at the height of 2 ½ miles, he suffered an accident that put his invention to the test. After all the gas escaped, the balloon began a wild descent crashing into the ground, throwing Wise ten feet away. He walked away unhurt but most likely shaken, by the accident. Having accomplished hundreds of flights by the time of the Civil War, he applied for the position of Chief Aeronaut but did not have the backing of the scientific community that Lowe enjoyed. Still he did get the support of General McDowell to fly during First Bull Run (First Manassas). He attached the balloon to a wagon to help maneuver it into position. Unfortunately, the balloon got caught in the trees. Wise was unable to fly another balloon during the war. However, he did return to flying after the war. In 1879, Wise disappeared during a flight over Lake Michigan.

Prior to the war, Wise and his partner, John LaMountain, made an attempt to cross the Atlantic. After a falling out with Wise, LaMountain took ownership of the balloon, “Atlantic”, which they had hoped to make the crossing. Between 1859-1861, LaMountain made a few less than successful trips aboard the balloon. After losing the position of Chief Aeronaut, he managed to get General Butler to allow him to provide observations at Fortress Monroe in Virginia, where he made the first recorded aerial observation of enemy troops. Despite this achievement, he was reassigned to the Union Army Balloon Corps under Professor Lowe when Butler was relieved of command. LaMountain attempted to smear Lowe and Wise, but McClellan chose to dismiss LaMountain who was never heard from again.

The Confederates did attempt ballooning during 1862-1863 but lacked the materials and experience that the North enjoyed. One of the Confederate's balloons was even captured by the USS Monitor while patrolling the James River. With the Union Army ending its balloon program, soon too did the Confederates.

Lowe was able to capitalize on his success during the war and became a millionaire for his patents working with hydrogen and gas extraction that allowed him to produce ice. A mountain in Pasadena was named in his honor as well as an Army heliport in Alabama. His granddaughter, “Pancho” Lowe Barnes, was an aviator in her own right and was featured as a character in the movie “The Right Stuff” as the owner of the “Happy Bottom Riding Club”.
© History In Full Color
User Agreement
Cancel
Continue