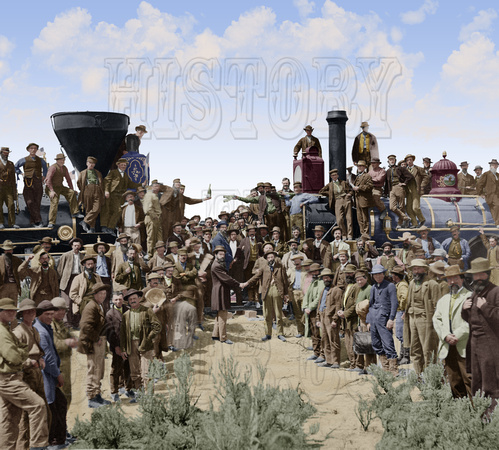 On May 10, 1869, the ceremonial placement of a golden spike completed the construction of the Transcontinental Railroad. Travel from the East to West Coast by railroad became possible in three-and a-half days instead of six months.

It was the idea of Theodore “Crazy” Judah to cobble a system of railroads to travel sea to sea. He sold presidential candidate Abraham Lincoln, among others, on the plan. Lincoln noted that in his experience, railroad projects tended to fail due to lack of funding to complete the project.

On July 1, 1862, Lincoln signed the Pacific Railway Act. Two companies would build the railroad with funds from the sale of adjacent land. Construction broke ground in 1863 from the two farthest terminals and would meet in the middle. Lack of labor due to the Civil War delayed construction.

The Irish, Chinese, Mormons, former slaves, Ex-Confederate and Ex-Union soldiers would build the line. The path of the railroad went through the hunting grounds of the Indians and mountains made of solid granite. Weather did not stop the work. Ten tunnels were drilled in 30 feet of deep snow. Both sides “raced” to lay the most track.

From Utah, telegraph operators reported each stage of the ceremony. Approximately 500 people, including two Wells Fargo stage drivers who drove the last runs of their route attended.

The honor of driving in the Golden Spike was given to Central Pacific’s Leland Stanford and Union Pacific’s Dr. T. C. Durant. Both missed their blow. A bottle of champagne was broken as a christening. Cheers were given and alcohol flowed. After the ceremony the Golden Spike was quickly exchanged with the standard.

Celebrations were held across the country. Factory whistles blew, cannons were fired, the Liberty Bell in Philadelphia, Penn. was struck, and a seven-mile parade was held in Chicago, Ill.

The goal of the Transcontinental Railroad was to facilitate trade and communication with China and Japan. Instead, in 1891, it was determined that 95 percent of the rail usage was national not international, fueling internal growth.
© History In Full Color
User Agreement
Cancel
Continue