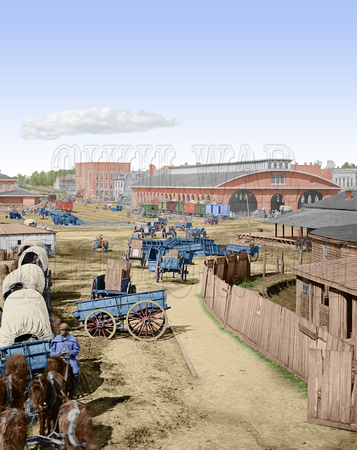 “The long blue line” is what the Union army’s supply wagons became known as. These distinctive wagons were used to bring supplies from the north further and further south. While it was faster to move equipment by rail, it was not always practical. The supply wagons could follow the army anywhere it needed.


Drawn by both horse and mule, the wagons became an integral part of the war effort on both sides. Everything from clothing, to food, to ammunition was brought by wagon to the site of the battles. As the war progressed, these wagon trains constantly moved supplies to the front lines, to supply the hundreds of thousands of troops in the field.


As Sherman’s men prepared to leave Atlanta on their “March to the Sea”, hundreds of these wagons were abandoned and subsequently some were used by civilians, to help evacuate the city. Looking closely, dozens of wagons can be seen littered in the railroad yard. Without a team of horses or mules to pull them, they would soon be part of the burning of Atlanta.
© History In Full Color
User Agreement
Cancel
Continue