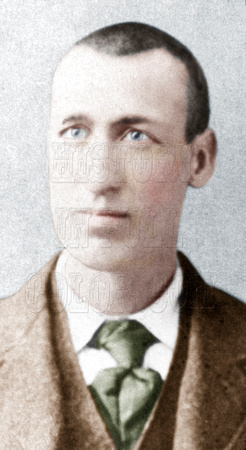 "Sim, the old girl's got her dancing slippers on tonight!" - Casey Jones

On April 30, 1900, John Luther “Casey” Jones’s decision to work a double shift turned him into an American folk hero. Today, we track passenger airplanes on time record. For Jones, having his trains “get there on the advertised” was a matter of pride.

The train flew down the tracks as Jones made up the time. His famous whistle, made of six thin tubes bound together, blew its “whippoorwill call”, as the train roared past.

The Passengers peering out into the night could see nothing. “But frequent applications and releases of the airbrakes, with accompanying jolts and jerks, and now and then an overpowering, uncanny sense of breathless-ness, told them that they were being carried along faster than they ever had been before.”

After 150 miles, Jones was almost on time. He had the satisfaction of believing they would reach Canton, Miss. by 4:05 a.m. “on the advertised”.

Neither Jones or fireman Simeon T. "Sim" Webb knew that up ahead at the Vaughan, Miss. delayed trains were still at the station. Webb spotting the red lights of the caboose yelled, "Oh my Lord, there's something on the main line!"

"Jump Sim, jump!", yelled Jones. Webb heard the scream of the whistle as he leaped. Jones reversed the throttle and slammed the airbrakes. The train slowed from 75 to 35 miles, plowing through the wooden caboose, a car load of hay, another of corn, and half way through a car of timber before leaving the track.

A passenger reported, “I was jarred a little in my bunk, but when fairly awake the train was stopped and everything was still. Engineer Jones did a wonderful as well as a heroic piece of work, at the cost of his life.”