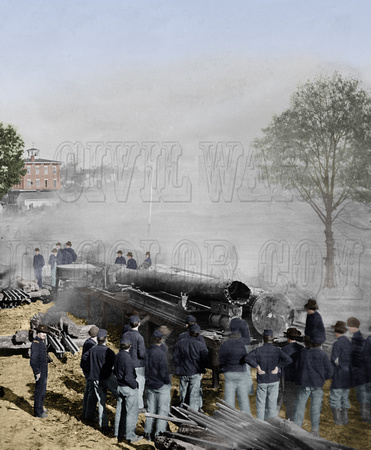 “... twisting the bars when hot. Officers should be instructed that bars simply bent may be used again, but if when red hot they are twisted out of line they cannot be used again. Pile the ties into shape for a bonfire, put the rails across and when red hot in the middle, let a man at each end twist the bar so that its surface becomes spiral.” Gen Sherman's orders on how to destroy railroad tracks

With the capture of Atlanta in 1864 it became imperative to keep the Confederate army from being able to reuse the railroads after Sherman left for his "March to the Sea". To destroy the railroads the soldiers would create a bonfire that and then stack the iron rails on top. When they reached the point that the metal was pliable they would have soldiers remove the rail from the fire and wrap it around a tree, post or telegraph pole to form what became known as “Sherman’s neckties”.

With little ability to replace the lost railroads the South quickly lost not only an important transportation system but also much of its means to resupply both civilian and military positions. Within three days of taking Atlanta all but one of the Confederate lines had been completely destroyed using this technique.
© History In Full Color
User Agreement
Cancel
Continue