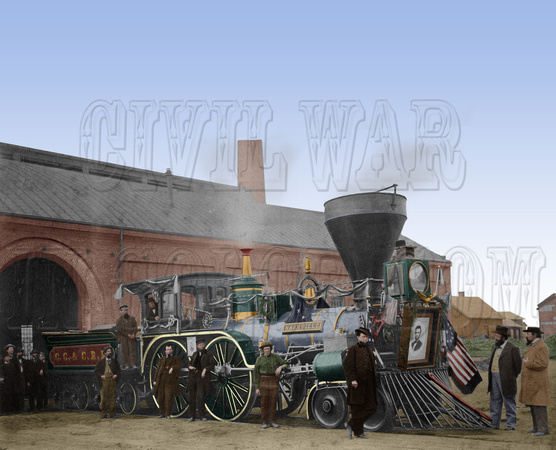 The steam locomotive "Old Nashville" was given the honor of pulling the Lincoln Funeral Train from Cleveland to Columbus, Ohio. It was one of several locomotives used. The locomotives and train cars were periodically changed during the journey to give multiple railroad companies an opportunity to participate.

The Cleveland, Columbus, and Cincinnati Railroad company published a Special Time Schedule, giving the Funeral Train exclusive right to the Road against all other trains. It also gave the public the opportunity to view the Train as it went by.

The Lincoln Funeral Train traveled at twenty miles an hour, slowing to five miles an hour when it approached crowds along the tracks. In the dark, despite the rain, people would bring lanterns, build bonfires to watch the train pass. Depending on the size of the town, the Train would go through arches draped in black cloth, greeted with minute guns firing, tolling bells, funeral dirges by musicians while being lit with bonfires and people holding torches. Thousands of Ohioans were able to show their respect and grief without attending the two official stops in Ohio. This event made the "Old Nashville" one of the most famous locomotives in Ohio history.

This photograph was taken at the Wilson Street Station in Cleveland, Ohio, April 28, 1865. As the best image of any of the various funeral train locomotives, all models of the "official" Lincoln funeral train use this engine as a reference.
© History In Full Color
User Agreement
Cancel
Continue