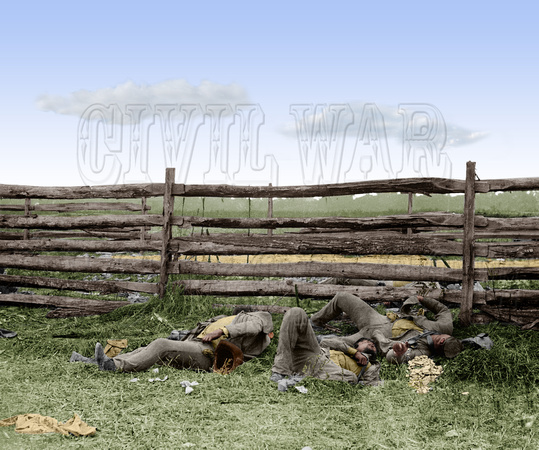 While always referred to as the “Stonewall Brigade”, Stonewall Jackson was actually only in command of the unit from April to October of 1861. The unit was formed at Harpers Ferry on April 27, 1861 from a number of Virginia regiments. At that time it as referred to as “Virginia’s First Brigade”, the battle of First Manassas (First Bull Run) would change that. It was during the course of this battle that both Jackson and the brigade would gain their nickname.

The Confederates were losing the battle and the Union troops had even stopped fighting and began collecting souvenirs, believing that the battle (and perhaps the war) had been won. General Bee of South Carolina saw Jackson facing toward the enemy and not retreating like many of the rest of his men. It was Bee, in the heat of battle, who gave the nickname that stayed with Jackson and the brigade from that day forward. "Yonder stands Jackson like a stone wall; let's go to his assistance. Rally behind the Virginians!" Afterwards they would always be referred to as the Stonewall Brigade.

Within three months of the battle, Jackson gave up direct command of the unit when he was promoted and took on command of the Army of Northern Virginia. The brigade did however remain as part of his command for the rest of his life. Besides fighting at both First and second Manassas (first and second Bull Run), the brigade fought at Antietam (pictured here), Fredericksburg, Chancellorsville, Gettysburg, Battle of the Wilderness, Spotsylvania Court House, Petersburg and on to Appomattox.

In the end only 219 survived of the more than 6,000 men that served with the unit throughout the war, the highest ranking survivor was a captain. Today, the Virginia Army National Guard’s 116th Infantry Brigade (formerly 1st Brigade) remains as a testament to the unit and still fly the battle streamers of the Stonewall Brigade’s actions during the Civil War as well as campaigns from both world wars and Iraq and Afghanistan.
© History In Full Color
User Agreement
Cancel
Continue