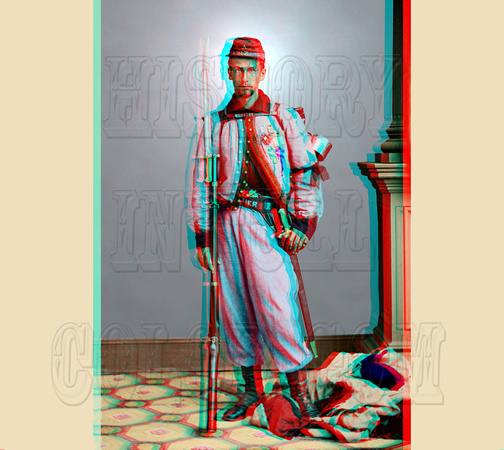 
On May 24, 1861, the day after Virginia seceded from the union, a large confederate flag could be seen just a mile from Washington D.C. Colonel Elmer Ellsworth, a friend of Lincoln's, offered to take his New York Fire Zouave's (including Francis Brownell) and retrieve the flag. Entering Alexandria, Virginia unopposed, he marched his men to the "Marshall House Inn" and cut down the flag. As he descended the stairs he encountered the owner, James Jackson who fired a shotgun and killed Colonel Ellsworth. Private Brownell immediately fired his rifle and killed Mr. Jackson.


Being the first officer killed on the union side, the death of Col. Ellsworth was a public sensation. A New York Unit was formed in the name of "Ellsworth Avenger's". For his part, Brownell was an immediate national hero. Promoted immediately to Corporal, he later rose to the rank of Lieutenant. Following the war he repeatedly petitioned to receive the Medal of Honor until he finally received it on his third attempt. He immediately returned the medal requesting that it should be inscribed with his actions, which was done.
© History In Full Color
User Agreement
Cancel
Continue