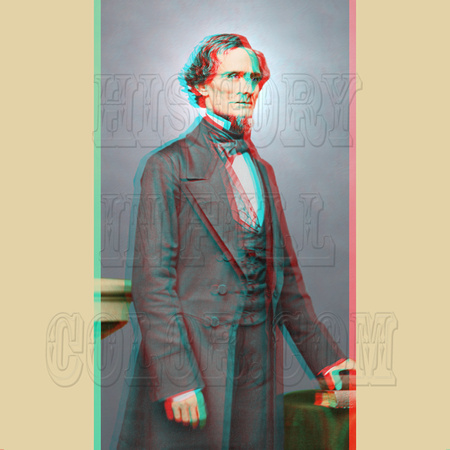 Jefferson Davis was probably America’s most well-known politician prior to the start of the war. Like many of his contemporaries, Jefferson Davis was a graduate of West Point. Following graduation, in 1828, he served in various locations. During the Black Hawk war, his commanding officer was Colonel (later president) Zachary Taylor. Davis met Taylor’s daughter Sarah and was married in 1835 after resigning his commission (Taylor did not approve). Sadly, shortly after the wedding both contracted malaria and Sarah died three months after the wedding.


By 1844 he had been elected to the House of Representatives and the following year married Varina Howell. With the outbreak of the Mexican-American war, he resigned from Congress and re-entered the military, this time as a Colonel. During the Battle of Buena Vista he was shot in the foot and cited for his bravery and initiative. The commanding general (Zachary Taylor), acknowledged that his daughter had been a better judge of character than he had.


Following the war, he was appointed to fill a vacancy in the Senate. He served as a Senator until 1851 when he ran unsuccessfully for Governor of Mississippi. In 1853 he became Secretary of War under Franklin Pierce. With the end of the Pierce administration he was re-elected to the Senate in 1857 and served until Mississippi succeeded in January of 1861. Immediately upon resignation he was appointed a Major General of the Mississippi militia and was elected president of the Confederacy soon after.


At the conclusion of the Civil War Davis was captured and spent two years in prison at Fort Monroe, Virginia. After his release he became president of Carolina Life Insurance Company and completed his memoir, “A Short History of the Confederate States of America”, shortly before his death in 1889.
© History In Full Color
User Agreement
Cancel
Continue