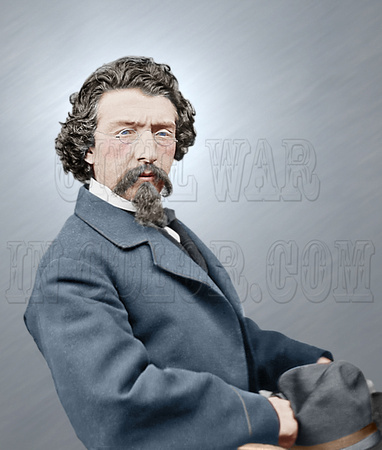 Many people today consider Brady the best known of the Civil War photographers. His role was larger and more complex. Born in 1822, he showed an early interest in art. At the age of 16, he became an art student full time. Within a year he saw his first daguerreotype photographs on display. Samuel F. B. Morse was one of the first U.S. photographers and began teaching classes on technique. Brady became one of his first students and pursued both art and photography.


By the time he was 22, Brady had his own studio in New York and began to exhibit his photographs. By the start of the Civil War, Brady was well known for photographing many Americans, including Lincoln. He soon decided to move beyond the studio and take photographs on the battlefields. Lincoln approved his request with the proviso that he fund the operation himself. First Bull Run (First Manassas) was his earliest real test. The images brought fame and renowned to his studio.


Hiring some of the best photographers of the day such as Alexander Gardner, James Gardner, Timothy H. O'Sullivan, William Pywell, George N. Barnard and Thomas C. Roche, Brady managed the operation from Washington. Each photo sold was marked as “Photo by Brady”. For this reason, even to this day, many think that he personally took most of the photographs. Many of these photographers left Brady and formed their own studios during the war.


Brady spent more than $100,000 creating more than 10,000 images. He expected the government would eventually purchase the images to document the war but there was no interest. He was forced into bankruptcy and sold his studio. In 1875, Congress paid Brady $25,000, which left him still deeply in debt. His eyesight, which had been deteriorating since the 1850’s, further complicated his ability to make a living. In 1896, he was involved in a streetcar accident. He died penniless in the charity ward of Presbyterian Hospital in New York City. His tombstone reads “Mathew Brady - Renowned Photographer of the Civil War”
© History In Full Color
User Agreement
Cancel
Continue