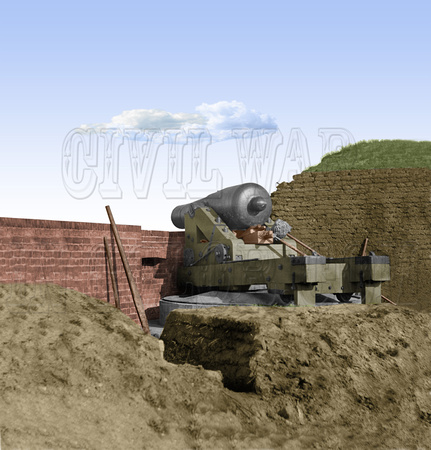 Like Fort Sumter, Fort Pulaski was built following the War of 1812 as part of the coastal defenses. Located just outside of Savannah Georgia it began construction in 1829 by the Army Corps of Engineers that included Robert E. Lee who had recently graduated from West Point. Using over twenty five million bricks, it was finally completed in 1847 at the cost of more than one million dollars.


With walls eleven feet thick it was impervious to all of the smoothbore cannons of the day. By 1860 the Army had only two caretakers in the fort and no active garrison. The governor of Georgia sent 100 men by steamship and easily took the fort without a fight. To consolidate their defenses the Confederates abandoned nearby Tybee Island, as it was not deemed prepared for battle or a threat if lost to the enemy. With that the Union army had a toehold in Georgia and brought in high powered rifled cannons.


While the fort was considered impervious to the smoothbore cannons of 1847, it was highly susceptible to rifled cannons of the Civil War. On April 10, 1862 Union forces began shelling Fort Pulaski with 36 guns. Thirty hours later they had breached the wall and where close to destroying the ammunition magazine of the fort. With no choice the fort was surrendered. While Savannah would stay in Southern hands until Sherman arrived at the end of 1864, it had lost its effectiveness as shipping port since the Union Army controlled the only access to the sea.


Late in the war it became a high ranking political prison housing the Confederate Secretary of State, War and Treasury as well as three governors and a Senator. Following the war some improvements were made for heavier guns, but by 1872 the end was near. Leaving only a single guard the fort was abandoned until it was declared a National Monument in 1924. The War department officially gave up the fort in 1933 when it became part of the National Park Service. Repairs to the fort were conducted by the Civilian Conservation Corps and the fort opened to the public only for a short time before World War II when it was closed again. This time the Navy used the island the fort sat on as a base. Today the fort is opened to the public and was used in the movie “The Conspirators” to serve as the gallows area at the end of the movie.
© History In Full Color
User Agreement
Cancel
Continue