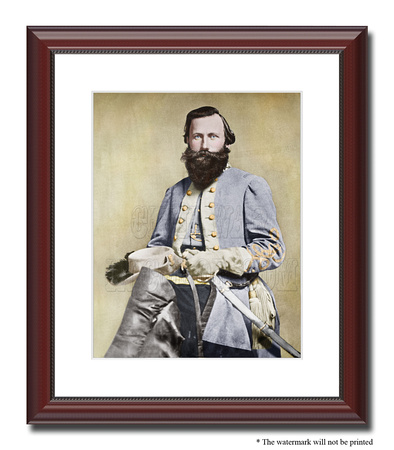 "We must substitute esprit for numbers. Therefore, I strive to inculcate in my men the spirit of the chase." CS Gen. J.E.B. Stuart

J. E. B. Stuart was known for his style, fighting with flair and a propensity for the dramatic. At the Brandy Station Grand Review, Stuart had his horse bedecked with garlands of flowers. In addition to a cavalry saber, he carried a 9-shot revolver with a lower barrel that fired a .20 gauge load of buckshot.

CS Gen. Lee considered Stuart, "the eyes of the Army". Lee also knew Stuart excelled at leading his men to victory. Although renowned for his cavalry exploits, Lee praised him for his "energy, promptness & intelligence", while leading Gen Stonewall Jackson's infantry during the Battle of Chancellorsville.

Jeb Stuart may be best known for his famous "Ride Around McClellan's Army". At CS Gen. Lee's orders, his cavalry was sent to gather intelligence for the June 1862 attack at Mechanicsville, Va., which was the first of the Seven Days' battles. Thirty-five miles deep in US territory, Stuart reasoned it would actual be safer to continue and circle McClellan instead of returning the direction they had came.

The 100 mile "Ride" was a huge morale booster for the South. Stuart had the added satisfaction of avoiding capture by US Gen. Cook - his father-in-law.
© History In Full Color
User Agreement
Cancel
Continue