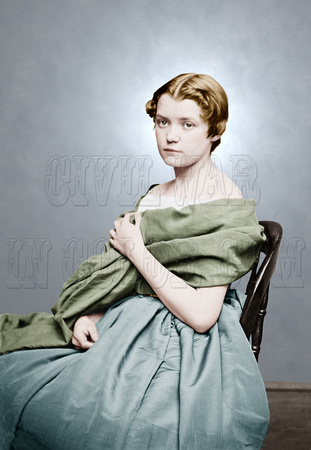 Mary Todd Lincoln's primary rival as Washington's Top Social Hostess was the daughter of the Secretary of the Treasury - twentyish Kate Chase. Chase and her father, Salmon, both believed they should be living in the White House and Mary Lincoln knew it.


During the upheaval of the Civil War, it seems odd that ordinary life was able to continue. Rivalries occurred, social events took place, politicians and even generals, who you would think would be busy fighting a war, stabbed each other in the back.


Determined women were only able to accomplish goals through the men in their lives. As such, social position did matter. Chase was a formidable adversary who was not afraid to stand up to the First Lady. She was residing in Washington before the Lincolns arrived and filled the social gap while the Lincolns were mourning the loss of their son Willie. She was impossible for Mary Lincoln to ignore.


Historian Doris Kearns writes, “Kate’s dynamic grace and intellect made her the most interesting woman in any gathering, as well as a critical force behind her father’s drive for the presidency. [Her] father’s ambitions and dreams became the ruling passions of her life. She gradually made herself absolutely essential to him, helping with his correspondence, editing his speeches, discussing political strategy, entertaining his friends and colleagues. While other girls her age focused on the social calendar of balls and soirees, she concentrated all her energies on furthering her father’s political career.”


On November 12, 1863, Kate Chase married William Sprague IV, the wealthy "boy governor" of Rhode Island. The news of the wedding appeared in newspapers across the nation. Abraham Lincoln attended the social event of the season. Mary Lincoln did not.
© History In Full Color
User Agreement
Cancel
Continue