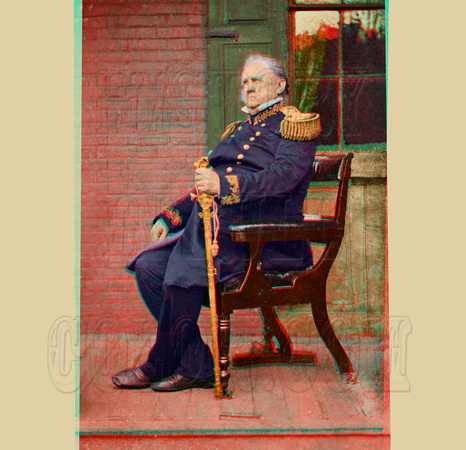 Born near Petersburg, Virginia in 1786, he attended the College of William and Mary and became a lawyer. At 22 he received a commission as a Captain (skipping the lower ranks) and quickly received a court martial for insubordination. After a year suspension, he returned to the Army and participated in the war of 1812, fighting in Canada.


Captured during a battle near Ontario, he was held prisoner for several months. After his release he was promoted to Colonel and again participated in action against Canada. In 1814 (at the age of 28) he was promoted Brigadier General and commanded a brigade. Severely wounded during battle, he was forced to sit out the remainder of the war recuperating.


Following his recovery, he remained in the army and participated in the “Trail Of Tears”, the forcible relocation of the Cherokees from Georgia to Oklahoma. By 1841 he was promoted to Major General (then the highest rank in the Army) and given the title of “General in Chief”. During the Mexican-American War he commanded troops during much of the campaign. His popularity was at its peak after the war, even the Duke of Wellington proclaimed him “the greatest living general”. The Whig party decided to capitalize on his popularity and nominated him for President. Scott accepted the nomination but was soundly beaten by Franklin Pierce.


Though defeated in the election, he remained popular for his military exploits and was promoted, by a special act of Congress, to Lieutenant General in 1855. The only person to have held this rank previously was George Washington.

By the start of the Civil War, Scott was grossly overweight and could not even mount a horse. Realizing that his age and health were against him in the coming war, he selected Robert E. Lee to replace him. By coincidence, the decision was made on the very same day Virginia chose to leave the Union. Scott, also a Virginian native, chose to stay with the Union. He outlined a course of action for the Union to defeat the South. Criticized in the press and openly taunted by George McClellan, he resigned on November 1st 1861.


Following McClellan’s departure in 1862, the North recommenced the “Anaconda Plan” (as Scott’s plan to defeat the South was known) and slowly began to turn the tide. While Grant and Sherman received much of the credit, Scott was the architect for the course they took. He survived the war and died in 1866 at the age of 79.
© History In Full Color
User Agreement
Cancel
Continue