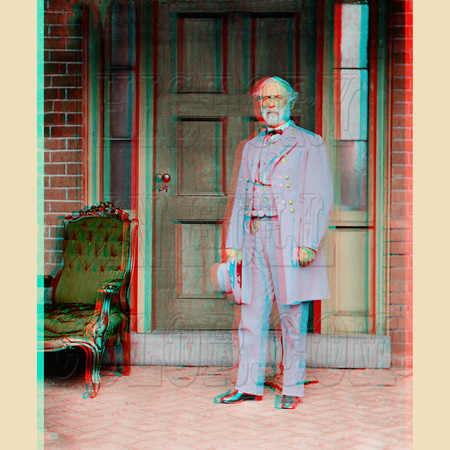 
Robert E. Lee came from a prominent, yet struggling Virginia family. His father, Henry Lee III, was known as "Light-Horse Harry" having earned the name during the American Revolution serving as a cavalry officer. Following the war he served in the Continental Congress, eventually becoming the 9th Governor of Virginia. By the time that Robert was born, the money was gone and he was placed in debtors prison. Following his release the next year the family moved to a small house in Alexandria.


When Robert was five his father was severely injured while defending a friend during a riot opposing the war of 1812. James Madison, then Secretary of State, arranged for Henry Lee to travel to the West Indies to recover, which he never did and died when Robert was 11. Left to her own, Robert's mother Anne arranged for extended visits to relatives to help reduce her expenses for her five remaining children.


It was one of these relatives that helped to secure an appointment to West Point for Robert. With the prominence of his father during the Revolutionary war and with little financial options for higher education otherwise Lee entered the academy in 1825. The head of the Army Corps of Engineers was supervised West Point and many, including Lee wanted to follow in his footsteps. Graduating 2nd in his class, with no demerits Lee became a second lieutenant in 1829.


During that first year in the Army he began courting the granddaughter of Martha Washington, Mary Custis. They were married in 1831 at Arlington House. Through much of his career he was assigned to various remote posts and Mary stayed at Arlington in her father's house. Though devoted to each other it was difficult for her to live as she had become accustomed on a low ranking officers salary when she was used to the grand estate of Arlington.


During the Mexican-American War Lee was one of the chief aides to Winfield Scott and was promoted to Major due to his personal work to help secure victory in several battles. During this time his wife's health began to fail and she spent even more time in Arlington. He returned to West Point, this time as Superintendent in 1852 and was there at the time his son Custis topped his father's record by graduating first in his class in 1854.


With the death of his father-in-law in 1857 he took ownership of Arlington and immediately discovered that the estate was greatly in debt. Taking extended leave from the Army he managed to get the estates finances back in order prior to the start of the Civil War.


At the beginning of 1861 Lee was still a Lieutenant Colonel, but Winfield Scott wanted him for a senior position and convinced Lincoln to promote him to Colonel on March 28th. When Fort Sumter fell on April 14th, Virginia has not succeeded yet and it was apparent that Washington would need it's defenses improved. On the 18th Lee was offered a promotion to Major General, this time, unlike three weeks earlier he declined. With the war truly underway he did not want to be in a position to invade the South and asked Scott to allow him to sit out the war. Scott told him that "I have no place in my army for equivocal men." and Lee resigned two days later to begin the greatest chapter of his military career fighting against the Union that he so loved.
© History In Full Color
User Agreement
Cancel
Continue