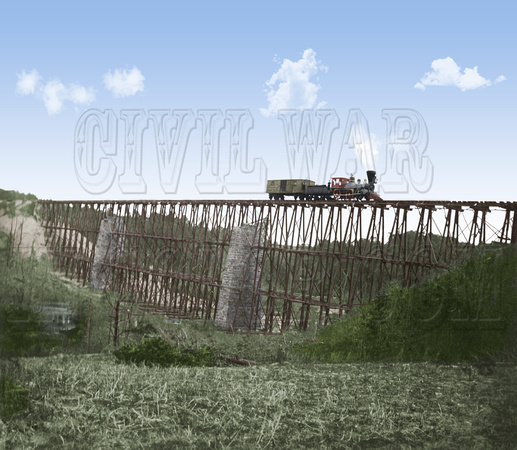 We agreed to, "rebuild the bridge over Cedar Creek for the use of four locomotives and forty cars for as long a time as they might be required for military purposes." US Chief Engineer W. W. Wright

In April of 1865, the retreating Confederates had burned the Raleigh & Gaston Railroad bridge over Cedar Creek, North Carolina. It was located below Franklinton and 25 miles north of Raleigh.

The US Military Railroads Department worked feverishly to keep US GEN Sherman's Army supplied as he fought CS GEN Johnston's Army of Tennessee. As part of that effort, Chief Engineer W. W. Wright cut the deal with the President of the Raleigh & Gaston Railroad.

Springing into action, the Construction Corps took 72 hours and 319,200 Feet B.M. of timber to build the 530 ft long and 88 feet high trestle. Seen in this picture is an unidentified 4-4-0 type locomotive shown with Atlantic & North Carolina RR Conductors Car N. 1. on the bridge.

According to Wright, "The rebuilding of the Cedar Creek bridge completed the railroad connection between Raleigh and the Roanoke River at Gaston and also at Weldon. During the suspension of hostilities we operated the North Carolina Railroad to Durham's station, twenty-five miles from Raleigh."

Johnston's surrender on April 26th, resulted in the bridge not being used to supply Sherman's Army moving forward. Instead, "a large amount of stores were sent up the North Carolina Railroad for use of the force which had just surrendered during the time required to parole the men."

On May 8, 1865, the USM RR returned the railroad line to its owners without having used the four locomotives and forty cars. By this time, Wright, "had a good opportunity to judge of the condition of the rolling-stock of the 'Confederacy'. It was nearly worn out."
© History In Full Color
User Agreement
Cancel
Continue