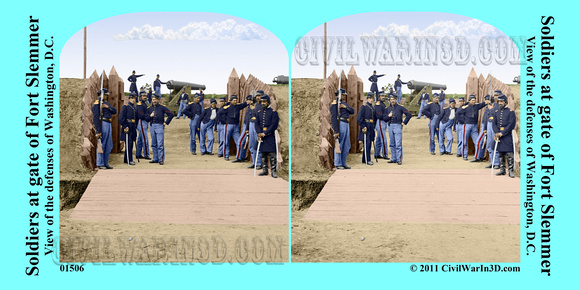 Fort Slemmer was built to be part of the ring of forts and batteries to defend Washington D. C. The forts were built close enough to each other that a runner could deliver a message at the first sight of the enemy. The perimeter of Slemmer was only 93 yards but boasted three 32- pounder seacoast guns and one 8-inch howitzer (all en barbette).

The only Defense of Washington Fort to see action during the war, Fort Stevens, was two miles away. Fort Slemmer's defenders passed the time drilling and maintaining the camp. Occasionally, President Lincoln would stop by while staying at the nearby Soldier's Home.

As part of the defense strategy, the land was cleared of vegetation. However, Slemmer was located on 24 acres of land owned by florist Henry Douglas. Flowers, plants, 1,970 fruit trees, numerous vines and bushes, ornamental trees and four acres of grass and sod were destroyed making it difficult for Douglass to ply his trade.

Fort Slemmer was named after LT Adam Slemmer, commander of Fort Pickens, FL who refused to surrender Pickens to the Confederates at the beginning of the War.

At the end of the war, Fort Slemmer was dismantled and the artillery withdrawn. Today traces of earthworks can be seen on the far north area of The Catholic University of America campus.
© History In Full Color
User Agreement
Cancel
Continue