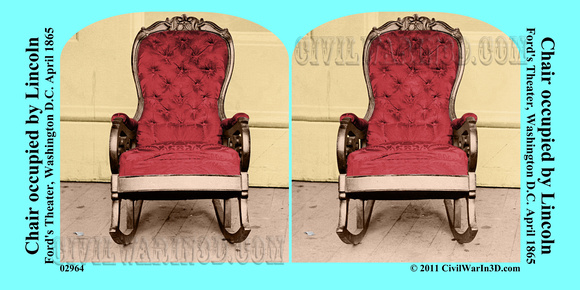 The chair referred to today’s as “Lincoln’s Chair” was originally the private property of Harry Ford who owned the Theatre. When it was announced that Lincoln would be attending, he had the chair moved to the box the president would be occupying. As Lincoln, as well as other dignitaries had attended Ford’s Theatre in the past it is not known if, or how often the chair had been used for such purposes.


Following the assassination the War department seized the theatre and declared it a crime scene. The week after Lincoln died Assistant Secretary of War, Charles Dana, ordered the chair removed, it had been reported that the chair was "much clipped and mutilated by persons desirous of carrying away pieces of it as relics." A few weeks later the chair was admitted as evidence in connection with the trial of the conspirators. The War Department held on to the chair until 1867 when it was transferred to the State Department. The chair along with other artifacts was put on display in the Patent Office until 1869 when custody was again transferred, this time to the Smithsonian.


The chair was not seen in public again for more than 20 years when it was sent to be included in a museum setup across the street from Ford’s Theatre in the house that Lincoln died. Returned again to the Smithsonian in 1902 where once again it was taken off display and remained in storage till 1928. Blanche Ford, the widow of the original owner, Harry Ford asked why the chair was not on exhibit and asked for its return if the Smithsonian did not have an interest in the chair.


Smithsonian curator Theodore Belote stated that the museum's policy not to show objects "directly connected with such a horrible and deplorable event." He then arranged for the return of the chair to the Ford family. Recent evidence indicates that Belote may have been sympathetic to the South and Anti-Lincoln and found this a convenient excuse to dispose of the chair. Before the end of the year the chair was up for auction eventually bringing $2,400 being purchased by another Ford. The “Henry Ford Museum” was opening in Detroit and this became a prize exhibit. The chair continues to remain on display in Detroit. A copy of the chair is now on exhibit at the Ford’s Theatre.
© History In Full Color
User Agreement
Cancel
Continue