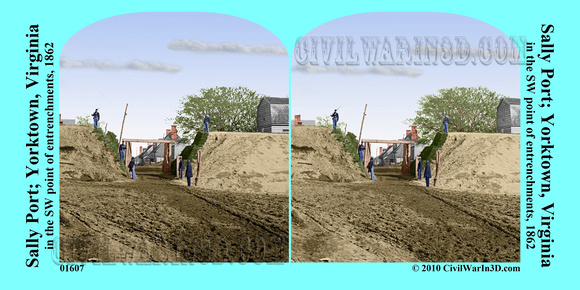 Sally Port is a secured, controlled entrance. Remembered today for its colonial heritage; Yorktown was also a battleground in the Civil War. Between April 5 - May 4, 1862, Yorktown was the focus of the Peninsula Campaign. McClellan (US) took on both Magruder (CSA) and Johnston (CSA) for a month that, in the end, turned out to more of a footnote than a turning point. Instead of the expected battle, the Confederates retreated from Yorktown when US General McClellan was ready to deploy his massive siege artillery batteries.


Many of the earthen fortifications were actually originally dug by British and American Colonial troops at the end of the Revolutionary war. These fortifications were improved upon and can still be seen. However, they are now referred to by the troops that held the positions in the 1780's, not the 1860's.
© History In Full Color
User Agreement
Cancel
Continue