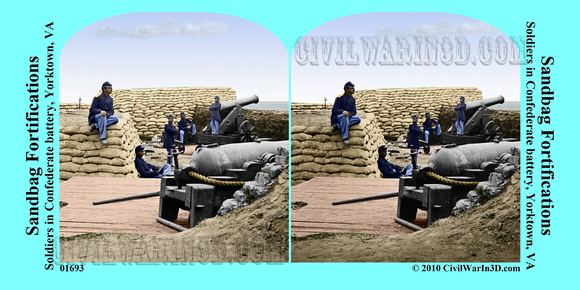 "TO THE ARMY OF THE PENINSULA: The long war of the Revolution culminated at length in victorious triumph on these very plains of Yorktown. These frowning battlements on the heights of York are turned in this second war of liberty against the enemies of our country. you breathe the air and tread the soil consecrated by the presence and heroism of our patriotic sires. Shall we, their sons, imitate their example, or basely bow the neck to the yoke of the oppressor? I know your answer." J. Bankhead Magruder, Major General, Commanding

In 1861, as the Confederate Commander of the Army of the Peninsula, Gen John Bankhead Magruder built fortifications across the peninsula. He anchored his line at Yorktown, rebuilding the 80 year-old fortifications erected by the British during the Revolutionary War.

In 1862, US Gen McClellan hauled in huge Siege guns to capture the Confederate position at Yorktown. McClellan planned to begin his bombardment of Yorktown on May 5, 1862. Aware of his plans, the Confederates abandoned the area on May 4th.

Federal troops took over Yorktown and held the area throughout the rest of the war.

In this image we see Federal soldiers in a Confederate battery (protected with sand bags) south of Yorktown. There is a 32-pdr. Navy gun in foreground. The far gun is a 24-pdr. siege piece.
© History In Full Color
User Agreement
Cancel
Continue