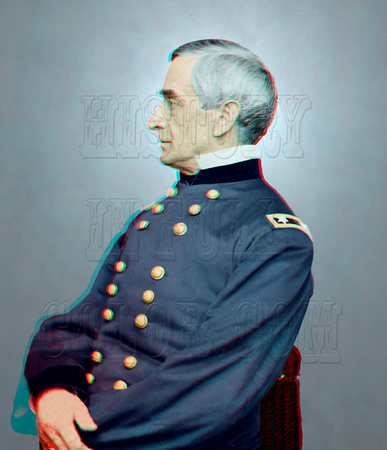 
Robert Anderson would seem an unlikely officer to be placed at Fort Sumter at the start of the war. He was born in Louisville, Kentucky and not only was pro-slavery but had personally owned slaves prior to the war. Graduating from West Point in 1825 he served in the Black Hawk War in 1832 and personally mustered Abraham Lincoln both in and out of the Army.


By the start of the Civil War he had been on active duty for more than 35 years and held the rank of Major. Assigned as the commanding officer for Fort Sumter in Charleston, South Carolina he was thought by the South that he would be sympathetic to them. When General Beauregard began his attack he remained loyal to the Union and limited his return fire so it would not endanger the civilian population. With limited supplies and few soldiers he surrendered the fort after two days of shelling without loss of life on either side. As part of the surrender, he arranged to have a 100 gun salute to the Union given prior to departure. One of the guns exploded killing a Union Soldier, resulting in the only death during the opening chapter of the war.


An immediate hero in the North, and a traitor in the South, he was promoted to Brigadier General and began a successful recruiting campaign. Within weeks he was back in command, this time as commander of the Department of Kentucky (Later Department of the Cumberland). This command was not to last. By October of 1861, failing health forced him to retire from active command and was replaced by General Sherman. He continued on in limited capacity until he officially retired in 1863. At the end of the war he was given a promotion to Major General and the honor of raising the same flag over Fort Sumter that he had taken down four years earlier. The ceremony was scheduled for April 14th, 1865. President Lincoln was also asked to attend, but declined. That decision proved fatal for Lincoln, since this was the night that he was killed by Booth. Following the war, Anderson’s health continued to decline and he moved to Nice, France for treatment. Dying there in 1871, his body was returned to the U.S. and is buried at West Point.
© History In Full Color
User Agreement
Cancel
Continue