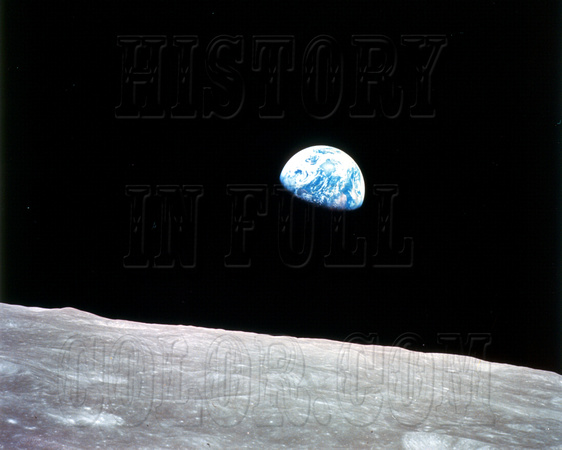 "We close with good night, good luck, a Merry Christmas, and God bless all of you -- all of you on the good Earth." Commander Frank Borman, Apollo 8, December 24th, 1968

In 1968, a turbulent world looked to the heavens for a unique view of our home planet. This photo of "Earthrise" over the lunar horizon was taken by the Apollo 8 crew in December 1968, showing Earth for the first time as it appears from deep space.

Astronauts Frank Borman, Jim Lovell and William Anders had become the first humans to leave Earth orbit, entering lunar orbit on Christmas Eve. In a historic live broadcast that night, the crew took turns reading from the Book of Genesis, closing with a holiday wish from Commander Borman.

This view of the rising Earth greeted the Apollo 8 astronauts as they came from behind the Moon after the fourth nearside orbit. Earth is about five degrees above the horizon in the photo.

The unnamed surface features in the foreground are near the eastern limb of the Moon as viewed from Earth. The lunar horizon is approximately 780 kilometers from the spacecraft. Width of the photographed area at the horizon is about 175 kilometers. On the Earth 240,000 miles away, the sunset terminator bisects Africa.
© History In Full Color
User Agreement
Cancel
Continue