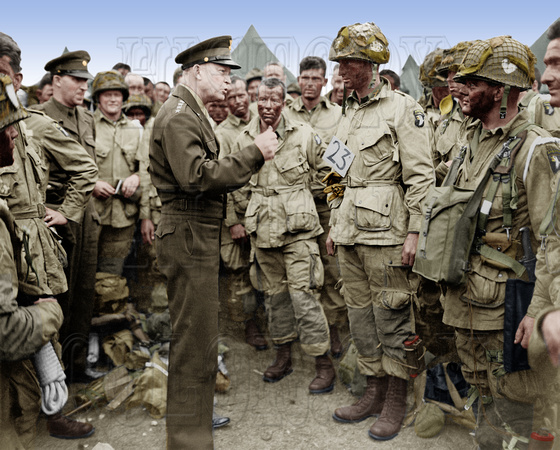 Iconic photo of General Eisenhower talking with American paratroopers on the evening of June 5, 1944, about 8:30 PM, as they prepared to depart for the Battle of Normandy. The men are part of Company E, 502nd Parachute Infantry Regiment, at the 101st Airborne Division's camp in Greenham Common, England.


Instead of the usual birthday celebration, Lt. Strobel (wearing # 23) spent his 22nd birthday preparing for Normandy. Strobel recalls, that his Division, "had darkened our faces and hands with burned cork, cocoa and cooking oil to be able to blend into the darkness and prevent reflection from the moon." Strobel and a second man can be seen wearing a live Hawkins Mine (used to blow the tread off a tank) strapped to their leg.


"Down the street came the General, surrounded by his staff and a large number of photographers, both still and movie. As he came toward our group we straightened up and suddenly he came directly toward me and stopped in front of me. He asked my name and which state I was from. I gave him my name and that I was from Michigan. He then said, 'Oh yes, Michigan's great fishing I have been there several times and like it.' He then asked if I felt we were ready for the operation, did I feel we had been well briefed and were we all ready for the drop. I replied we were all set and didn't think we would have too much of a problem.

He seemed in good spirits. He chatted a little more, which I believe was intended to relax us and I think that all of us being keyed up and ready to go buoyed him somewhat."


"Eisenhower told Capt. L. 'Legs' Johnson, 'I've done all I can, now it is up to you.' He told a group of enlisted men not to worry, that they had the best equipment and leaders in the world, with a vast force coming in behind them. A sergeant from Texas piped up, 'Hell, we ain't worried, General. It's the Krauts that ought to be worrying now.'"

The most difficult decision General Eisenhower had made in the war was to send the 82nd and 101st Airborne Divisions to drop onto the mainland in the hours before the main force hit the beaches, to secure the causeways for the men who would be coming ashore. According to Kay Summerby, his driver, "He wanted to see the boys off. Ike had to look these troops straight in the eye, knowing that he, only he, was responsible if they and the men of the 82nd Airborne encountered sheer disaster."

A Red Cross worker was at the airfield passing out doughnuts and hot coffee to the paratroopers that night when Ike drove up. She gave him a cup of coffee, too. But, then, she noticed his hand was shaking so badly the coffee threatened to spill over -- could burn him -- and eased the cup out of his hand.