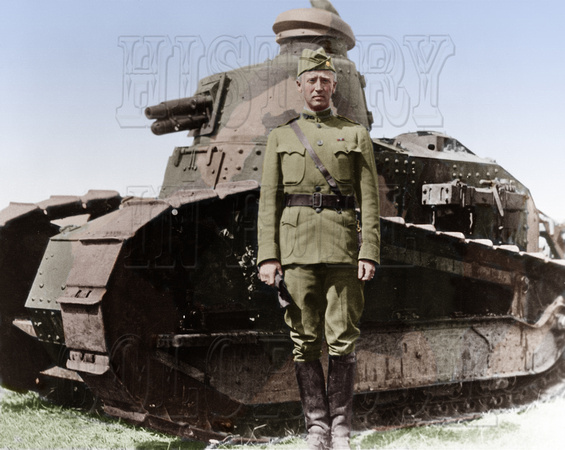 Patton is shown here in front of a Renault FT light tank. A shipment of ten tanks from the Renault factory, arrived on March 23, 1918, at the Tank School at Langres, France. As the only soldier with tank-driving experience, Patton personally backed seven of the tanks off the train. It is likely that this image was taken at that time.

The tanks were sent to Patton to establish the American Expeditionary Force (AEF) Light Tank School. As preparation, Patton went to the French Army's tank training school where he had the opportunity to drive a Renault FT light tank. He also visited the factory where the tanks were being manufactured.

In the post, he not only trained crews on how to support the infantry using tanks, he demonstrated to reluctant infantry officers the benefits of using tanks. Following the war he partnered with Dwight Eisenhower to further understand the role of tanks in modern warfare.
© History In Full Color
User Agreement
Cancel
Continue