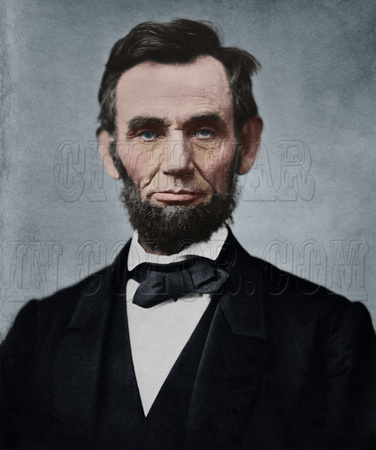 "My best friend is the man who'll get me a book I ain't read." Abraham Lincoln as a child

Lincoln's lifelong love of reading began in his youth. He read every book he could get his hands on in the book scarce frontier.

"Seems to me now that I never seen Abe after he was twelve that he didn't have a book in his hand or in his pocket ... When noon came he'd set under a tree, an' read an' eat. An' when he come to the house at night, he'd tilt a chair back by the chimbley, put his feet on the rung, an' set on his back-bone an' read ... It didn't seen natural, nohow, to see a feller read like that .. but Aunt Sairy declared Abe was goin' to be a great man some day, an' she wasn't goin' to have him hindered." Denis Friend Hank, Lincoln's cousin

As other bookworms can relate, Lincoln would combine babysitting and reading. When Willie & Tad were very small he would haul them around in a little wagon, pulling it up and down Eighth street, often while reading a book. One day, Tad tumbled out and lay squalling on the ground. Absorbed in his book, Lincoln didn't notice. He was a whole block away before he heard Mary hollering for him to stop. Turning, he was surprised to see his wife holding the sobbing toddler.

What Lincoln read, even as a child, would impact the speeches he made as an adult.

"Abe could easily learn and long remember", his stepmother Sarah would recall.

During childhood, Lincoln's first books were the school's texts and the books Sarah Bush Lincoln had brought with her from Kentucky. Her collection included the family's "Bible", "Pilgrim's Progress" and "Robinson Crusoe". But his favorite, read over and over was "Aesop's Fables".

During his acceptance speech as the Illinois Republican Party nominee for the US Senate, Lincoln would incorporate the moral of Aesop's tale of the "Lion and Four Bulls" along with a passage from the Bible to create the best known passage of the speech:

"A house divided against itself cannot stand. I believe this government cannot endure, permanently, half slave and half free. I do not expect the Union to be dissolved — I do not expect the house to fall — but I do expect it will cease to be divided. It will become all one thing or all the other. Either the opponents of slavery will arrest the further spread of it, and place it where the public mind shall rest in the belief that it is in the course of ultimate extinction; or its advocates will push it forward, till it shall become lawful in all the States, old as well as new — North as well as South."
© History In Full Color
User Agreement
Cancel
Continue