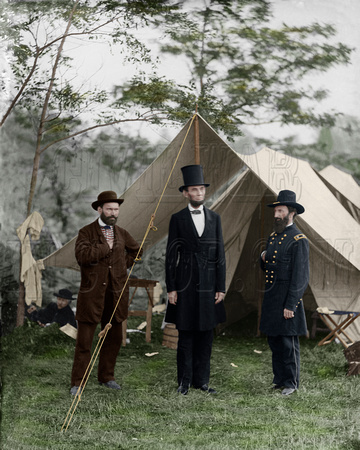 Following the Battle of Antietam, to encourage GEN McClellan to pursue the Confederates into Virginia, Lincoln travels to Sharpsburg, Maryland. After his victory, McClellan believes his position is secure.

Wiley congressman turned general, McClernand, smelling blood in the water comes to visit his old friend Lincoln. Beginning during the Black Hawk War in 1832, their relationship grew through the years as both men became Illinois lawyers and politicians.

While on leave from the western front, McClernand remarries, campaigns for McClellan's job and was granted command of an expedition against Vicksburg, Mississippi. As the pair would correspondence frequently, McClernand's access to the President was a thorn in every other general's side.

In this picture, Allan Pinkerton, head of Lincoln's security detail is seen on the left. GEN McClernand is on Lincoln's right.
© History In Full Color
User Agreement
Cancel
Continue