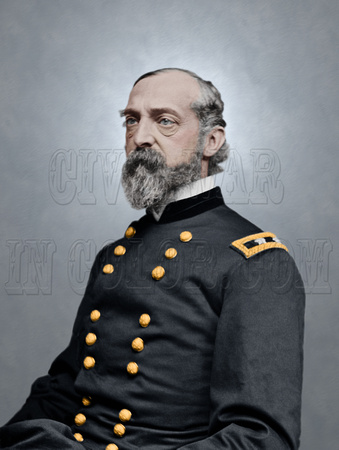 Meade was the son of a wealthy Philadelphia business man serving as a Naval Agent in Spain. Growing up in Spain was exciting until his father died when George was 13. Due to his father’s backing of Spain in the Napoleonic wars the family was financially ruined. Returning to the United States with little money and few options, George attended West Point to receive a free education and graduated in 1835. Within a year he had resigned from the army and pursed work as a civil engineer. Getting married in 1840 caused him to look at his opportunities for his newly growing family. Within two years he was back in the army, returning in 1842 and remaining the rest of this life.

After serving in the Mexican-American war he joined the Army Corps of Engineers building lighthouses along the Atlantic coast. Rising slowly in the ranks he was a captain at the start of the war (now almost 20 years since returning to the army). Within months he was promoted from captain to brigadier general and was given responsibility to construct new defenses around Washington. When his brigade joined McClellan’s during the Peninsula Campaign he was wounded in the arm, back and side.

Upon his recovery he returned to combat. In November of 1862 he was promoted again, this time to Major General. Just days before the start of the battle of Gettysburg he was given command of Army of the Potomac (at the time the highest ranking position in the army). So surprised was he about the appointment he wrote his wife later that he thought he was being arrested when the aide came to give him the news. Two days later Gettysburg started and Meade managed to beat Lee, but did not purse Lee as aggressively as Lincoln would have liked.

In March of 1864 Grant was given command of all Union armies and Meade offered to resign. Grant declined and helped restore Meade’s reputation which had been tarnished in the months following Gettysburg.

With Grant making his headquarters with Meade the two worked closely together for the rest of the war. This close supervision did not sit well with Meade, and his public opinion declined again. After a personal feud with one reporter, the Northern papers conspired to attribute future victories to Grant, and setbacks to Meade.

Following the war he held various military positions and served as commissioner of Fairmount Park in Pennsylvania until his death in 1872. His reputation continued to suffer for much of the 19th century but is recognized today for being an effective overall leader and specifically a superb leader during Gettysburg.
© History In Full Color
User Agreement
Cancel
Continue