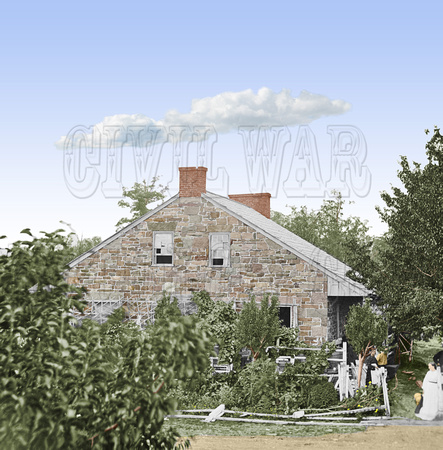 “[It was] running the gauntlet in the strict sense of the word. The bullets were flying from each side in a perfect shower. The air seemed so filled that it seemed almost impossible to breathe without inhaling them. Some one fell beside me almost every step,” - Lt. Wilbur Judd, 97th NY

In 1863, the building known today as “General Lee's Headquarters” at Gettysburg, Pa. shot to fame after Matthew Brady’s photograph of it appeared in Harper’s Weekly. The stone home of 69-year-old (Widow) Mary Thompson was located between four key landmarks of the first day of fighting; Seminary Ridge, Oak Ridge, the Chambersburg Pike and the unfinished railroad the locals used as an alternate roadway to avoid paying the toll. If the walls could tell tales, the bloody fighting in the vicinity could be the photo caption, not the gathering place of Confederate generals.

On July 1st, at 7:30 a.m., the Battle of Gettysburg began. By 3:30 p.m., the entire Union position began to crumble. To support the infantry, artillery was placed on the ridge. “Just a few yards west of the Widow Thompson's house were the six Napoleons of Battery B, 4th United States Artillery under the direction of Lt. James Stewart. Three of the guns, under the command of Lt. James Davison, were positioned between the Chambersburg Pike and the railroad cut. The other three were positioned north of the cut in front of the Railroad Woods, and were commanded by Lt. Stewart himself. Just south of these and across the pike from the stone house were the two three-inch rifles of Lt. Benjamin W. Wilber's section of Battery L, 1st NY Light Artillery. South of these guns were the six Napoleons of Cpt. Greenlief T. Stevens' 5th ME Battery, and three three-inch rifles of Cpt. James Cooper' s Battery B, 1st PA Light Artillery.”

As the U.S. Army retreated towards the protection of the artillery, the Confederates followed, “yelling like demons, in a mad charge for our guns. … Almost at the same moment, as if every lanyard was pulled by the same hand, this line of artillery opened, and Seminary Ridge blazed with a solid sheet of flame, and the missiles of death that swept its western slopes no human beings could endure…. After we had ceased firing and the smoke of battle had lifted, we looked again, but the charging Confederates were not there. Only the dead and dying remained on the bloody slopes of Seminary Ridge,” wrote Corporal Robert Beecham of the 2nd WI.
Still, the rebel line continued to move forward. Ordered to retreat, Lt. Col. Rufus Dawes of the 6th WI realized that, “If we had desired to attack [C.S. Gen. Richard] Ewell's twenty thousand men with our two hundred, we could not have moved more directly toward them. We knew nothing about a Cemetery Hill. We could see only that the on-coming lines of the enemy were encircling us in a horseshoe.”

The men fought to move the artillery. Stewart relates how the pintle hook broke on a third piece. “As this happened, a party of rebels came running out of the timber adjoining, shouting: ‘Halt that piece!’ We were all completely surprised, but one of the men was fully equal to the occasion, and shouted back: ‘Don't you see that the piece is halted?’ … During all this time the enemy were firing upon us at not more than one hundred yards; and just as we got the gun out of the [railroad] cut, the enemy made a dash, this time getting within fifty or sixty yards, killing one driver and seriously wounding the wheel driver and two horses, which again caused delay. Seeing his predicament, the 88th PA "made a determined stand to save Stewart's Battery.”

Stewart rode back to check on Davison’s guns. The enemy, spotting him “shouted, ‘Surrender!’ but as I had not gone there for that purpose, I wheeled my horse and started him off as fast as he could go. … I started across the field, when the first thing I observed in front of me was a high fence, and as I could not go either to the right or left without being made a prisoner, I headed my horse for it, and he took the leap in splendid style. As he was making the jump I was struck on the thigh with a piece of shell. The shock was terrible, and I thought at first my leg was broken, but after feeling it I found the bone all right.”

Others were not as fortunate. Noticing that the fleeing Union Army was using the railroad cut as an escape route, C.S. Gen. Stephen Ramseur ordered a battery to throw shells into the cut. The fleeing men had to choose between surrender or “running the gauntlet”.

As his men chased the Federals through the town, C.S. Gen. Robert E. Lee arrived at the Thompson house on his “well-bred iron gray, Traveler”. Selected as Lee’s Headquarters, four guards were placed around the house and “half dozen tents” were set up near the house. The stone building, now within his lines, offered an elevated position with a view of the enemy that could be seen with a field glass. Lee may not have realized it, but at the end of the First Day of the Battle of Gettysburg, his Army may have captured as many as 5,000 men.

Inside the house during the battle, the Widow Thompson with her daughter-in law Mary, huddled in the basement as the roar of combat engulfed her home. Previously, on June 30th, Mary gave birth to her second child, Jane Meade Thompson. Furthermore, the wounded who could, made their way to any building seeking help. Her neighbor, Catherine Foster recounts:

“[Thompson’s] house and lot were filled with wounded and dying during the first day; she remained to care for them, and had a daughter [Hannah] living at the foot of the hill, who baked up a barrel of flour into bread, which she carried up the hill to the wounded, and refused to cease doing so during the three days...until her clothes were perforated with bullets and yet she would not be dissuaded, said, ‘In God is my trust.’ All her clothes and bedding except those on her person were used in dressing the wounded and her carpets in wrapping the dead for burial. An empty stone house and fenceless yard were all that was left the widow of seventy years.”

Throughout the next few days, the house was a beehive of activity as incoming messages came for Lee and his generals and artillery was moved into position nearby. Worse, the firing of the guns before Pickett’s Charge sounded, "it seemed as if the heavens and earth were crashing together."

After the Battle, Lee’s Army crossed back over the Potomac River and the Union Army followed. Negative rumors of Lee’s personal conduct began to swirl. To get to the truth, Dr. Junkin of the Sunday School Times went to interview Thompson. The interview appeared in the Lutheran and Missionary, a Philadelphia newspaper on September 24, 1863. Thompson stated that, “she never heard any profane or improper language from him [Lee]. General [J.E.B.] Stuart was with him part of the time. The impression which she had of him was not favorable, Stuart wanted to enter Gettysburg, and burn and make an indiscriminate plunder of all property, but to this Gen. Lee would not consent. She thought Stuart was a bad man: but Lee expressed himself and acted like a humane man showing much feeling on account of the sufferings and the horrors of War.”
© History In Full Color
User Agreement
Cancel
Continue