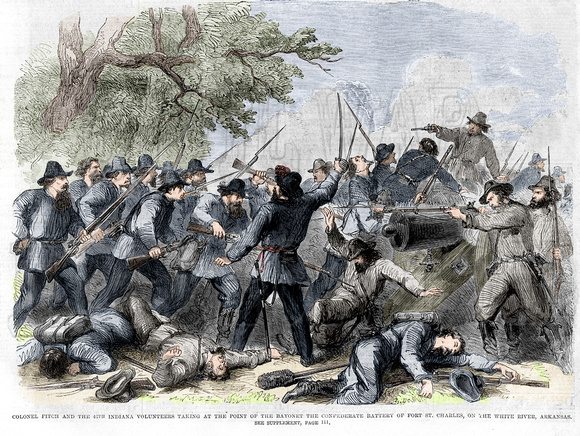 Prior to the war Graham Fitch was a practicing physician that had gone on to serve two terms in Congress before being elected to the U.S. Senate. With the outbreak of the Civil War Fitch organized the 46th Indiana Infantry becoming it's first commander.


On the morning of June 17, 1862, USS Mound City, St. Louis, Lexington, Conestoga, and transports, under the command of Cdr. Augustus Kilty, proceeded up White River towards St. Charles, Arkansas, attempting to resupply Maj. Gen. Samuel R. Curtis's army near Jacksonport. A few miles below Saint Charles, the 46th Indiana Infantry, under the command of Col. Graham N. Fitch, disembarked, formed a skirmish line, and proceeded upriver towards the Rebel batteries on Saint Charles' bluffs, under the command of Capt. Joseph Fry, C.S.N. At the same time, the Union gunboats went upriver to engage the Rebel batteries; Mound City was hit and her steam drum exploded scalding most of the crew to death. More than 125 sailors from the Mound City were killed, but the other ship was towed to safety. Col. Fitch halted the gunboat activities to prevent further loss and then undertook an attack on the Confederate batteries with his infantry. The 46th Indiana turned the Rebel flank which ended the firing from the batteries and left Saint Charles open to Federal occupation.


Due to his injuries received during the battle Col. Fitch resigned his commission late in 1862 and resumed his medical practice. Col. Fitch passed away in 1892 at the age of 82.
© History In Full Color
User Agreement
Cancel
Continue