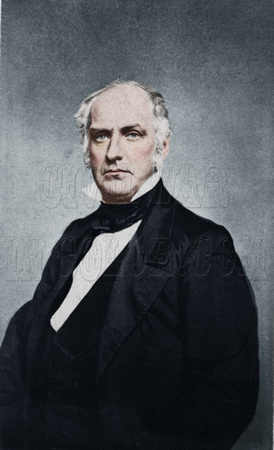 Edward Baker was the first and only Senator to die in battle. The death of the popular congressman, during the Battle of the Ball's Bluff, had political ramifications that reverberated throughout the Civil War.


News of Baker's death swiftly crossed the nation. In San Francisco, California, the telegraph line had just been completed. Reverend Thomas Starr King was present as one of the first messages received in the newly installed telegraph office told of Baker's demise. The sorrow his death caused, along with Baker 's burial in San Francisco, brought the impact of a distant war home to California. In three years of fund raising, King was instrumentally in California collecting $1,233,978 for the Sanitary Commission out of the $4,924,049 that was contributed nationally. This was 25% of the total amount raised, which is a remarkable feat for a state, that at the time, had a population about half that of New York City's.


A long time family friend of the Lincolns, Baker spent the day before his death visiting the family at the White House. A passing officer described the scene: "Mr. Lincoln sat on the ground leaning against a tree; Colonel Baker was lying prone on the ground his head supported by his clasped hands. The trees and lawns were gorgeous in purple and crimson and scarlet, like the curtains of God's tabernacle." Not far away ten year old Willie "was tossing the fallen leaves about in childish grace and abandon." When the time came for Baker to take his leave, he shook Lincoln's hand and then took Willie into his arms and kissed him.


The entire family was distraught over Baker's death. Willie wrote a poem, "On the Death of Colonel Edward Baker", which was published in the Washington D. C. paper, the National Republican. During Lincoln's second Inaugural Address, he echoed the sentiments Willie expressed in the poem by urging the nation, "to care for him who shall have borne the battle, and for his widow and his orphan".


In 1861, the Battle of Ball's Bluff was considered a significant fight. In 1864, it would have been considered a skirmish. However, the shock of Baker's death led Congress to establish the Congressional Joint Committee on the Conduct of the War. As a result, Union commanders second-guessed their decisions throughout the remainder of the War.
© History In Full Color
User Agreement
Cancel
Continue