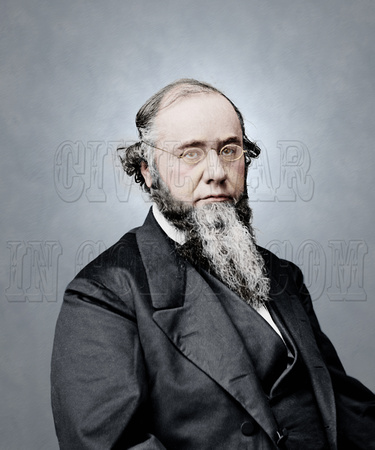 "Without him I should be destroyed." Abraham Lincoln

Lincoln recognized Stanton's ability as Sec. of War but whenever necessary he managed to "plow around him". Lincoln and Stanton would spend hours every day together at the War Department and were known for their clashes as Stanton would "would become furious and fly into fits of rage at Lincoln time and time again." However, when asked to remove him from office Lincoln said:

"He is the rock on the beach of our national ocean against which the breakers dash and roar, dash and roar without ceasing. He fights back the angry waters and prevents them from undermining and overwhelming the land. Gentlemen, I do not see how he survives, why he is not crushed and torn to pieces. Without him I should be destroyed."

Upon Lincoln’s death, it was Stanton, his one-time political rival that spoke the words, “Now he belongs to the ages”.

Soon afterwards, John Hayes told Stanton, “Not everyone knows, as I do, how close you stood to our lost leader, how he loved you and trusted you, and how vain were all the efforts to shake that trust and confidence, not lightly given and never withdrawn.”

During the Johnson administration Stanton clashed often with the new President, Andrew Johnson, who decided to replace him. Stanton refused to leave and barricaded himself in his office. The Senate felt that since the President needed their approval to confirm a Cabinet Secretary, they must also confirm his dismissal, which they did not. The Senate saw this as a pure breach of Presidential powers and moved to impeach Johnson. By a single vote Johnson was able to survive, but Stanton was out.
© History In Full Color
User Agreement
Cancel
Continue