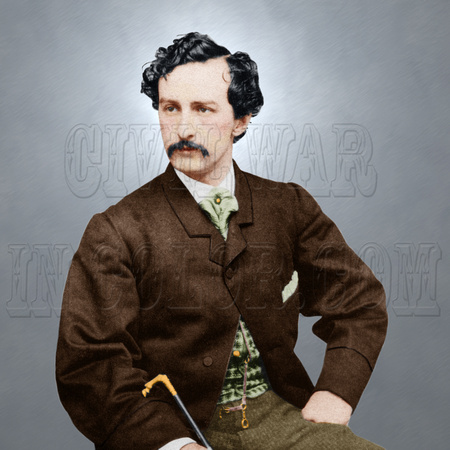 "He was so young, so bright, so gay - so kind. I could not have known him well." Clara Morris, respected actress

By April of 1865, John Wilkes Booth was a twenty-seven year old matinee idol. Between his good looks and fashionable attire, "both men and women halted in the streets and instinctively turned to admire him as he passed."

"It is scarcely exaggeration to say the sex was in love with John Booth. At the theater - good heavens! As the sunflowers turn upon their stalks to follow the beloved sun, so old or young - our faces smiling - turned to him", said Clara Morris.

During his last day alive, Lincoln met with John P. Hale, his appointee as the next ambassador to Spain. Hale having lost his election as New Hampshire Senator, welcomed the appointment as an opportunity to leave the country and break up his daughter Lucy's romance with Booth. Like most actors, Booth was considered a notorious rake.

This is one of John Wilkes Booth's favorite picture of himself. As a famous actor, Booth would frequently have himself photographed. His wardrobe, valued at $15,000 at death, was part of his leading man image. Instead of the 8 x 10s celebrities hand out today, Booth would give and receive carte de visites. At his death, Booth had the carte de viste of Lucy Hale and four actress with him.
Restoration and colorization copyright 2014 by HistoryInFullColor.com
User Agreement
Cancel
Continue