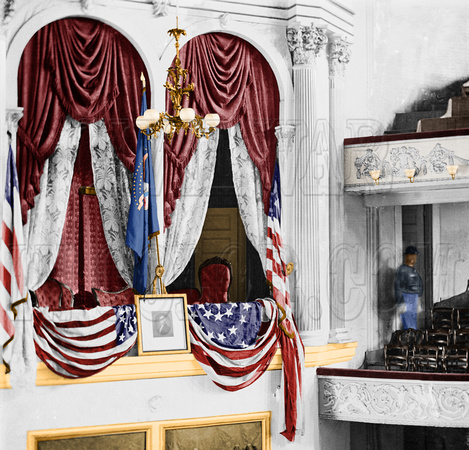 Here, Lincoln was assassinated on April 14, 1865. In the Box, Lincoln & his wife Mary were seated on the right with Henry Rathbone & his fiancé Clara Harris seated on the left. Proprietor John Ford had a rocking chair, now referred to as the "Lincoln Chair", moved into the Box for Lincoln's comfort.

The Box was decorated with borrowed flags in honor of Lincoln's twelfth visit. American flags were reportedly in short supply in the capital, and it is well established that the theater borrowed flags to decorate the Presidential box. The borrowed blue Treasury Guard regimental flag was hung from a staff fixed to the pillar between the two boxes. It was this flag that tripped John Wilkes Booth.

The regimental flag has also been identified as "being in the grasp of the President when he was shot." Eyewitness accounts from the theater corroborate this story, with several stating that the flags obscured Lincoln's view, and one witness specifically testifying that he saw Lincoln holding the drapery out of his way just before the shooting.

A re-creation of the full decoration of the box was set up on April 17, 1865, and recorded in photographs taken by the firm of Mathew Brady.
© History In Full Color
User Agreement
Cancel
Continue