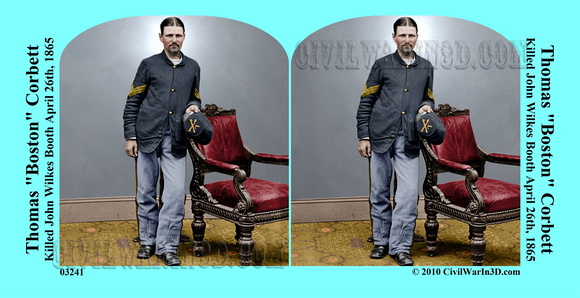 “Mad as a hatter” is a term that would certainly apply to Boston Corbett. Mercury, used in hat making in the 19th century, was well known to cause dementia among hat makers and Boston Corbett was no exception. Born in London as Thomas Corbett, in 1832 he immigrated to New York with his family when he was young. In Troy, New York he became a hatter. When his wife died in childbirth he decided to leave New York and move to Boston. Joining the Methodist Episcopal Church he decided that he should change his name to “Boston” in honor of the city where he found his new faith.

By 1858 it was clear that all was not right with Boston. As an act of self-mutilation he injured himself with a pair of scissors, decided to prepare a meal and attend a prayer meeting before seeking treatment. Acts like this and the continued use of mercury in the hat maker’s trade caused Corbett to be considered unbalanced by the start of the war. None the less he entered the Army on a 90 day enlistment in April of 1861. He left the Army in August and in September of 1863 enlisted again. Nine months later, in June 1864 Colonel John Mosby captured Corbett. He was held at Andersonville for five months before he was exchanged.

Promoted to sergeant, he was part of the 16th New York Cavalry when they were sent to apprehend John Wilkes Booth. Surrounding Booth in a tobacco barn in Virginia, the unit set the barn on fire in an attempt to force Booth to surrender. Corbett saw Booth through a crack in the barn and later indicated that “Providence directed me” and shot Booth with his revolver. Booth was paralyzed and died a few hours later. Corbett was arrested for disobeying orders, but Edwin Stanton later dropped the charges and Corbett received $1653.84 as his share of the reward money.

Leaving the Army, he found it increasingly difficult to work as a hatter due to his new celebrity. After unsuccessful attempts to start a new life in Boston, Connecticut and New Jersey, he became more erratic and threatened several people with a gun during an Army reunion in Ohio in 1875. Three years later he moved to Kansas.

By 1887, twenty-two years after killing Booth, he was given the position as doorkeeper for the Kansas House of Representatives. Upon hearing one of the members mocking the opening prayer one morning, he pulled his revolver and threatened the man. He was arrested and committed to the Topeka Asylum, but escaped in May of 1888. He stayed briefly with a friend and then disappeared. While it is unclear what became of him, evidence suggests that he was killed in 1894 during a fire in Hinckley, Minnesota.
© History In Full Color
User Agreement
Cancel
Continue