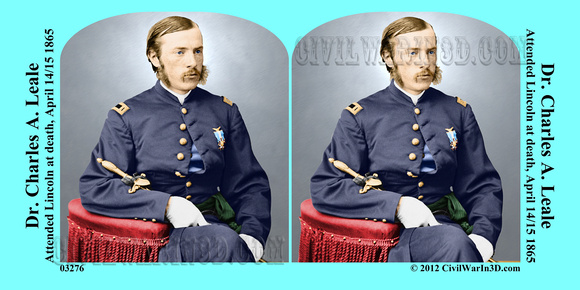 Charles Leale graduated from medical college shortly before his 23rd birthday, just as the war was coming to an end. Joining the army as an Assistant Surgeon, he was assigned to care for wounded officers at a hospital in Washington.


This hospital treated men who had been evacuated from the field to a place behind the lines that could offer a higher level of treatment. While this was an important job, it was not the battlefield duty that many surgeons had been noted for.


Whether Dr. Leale had desired something more is not known, that he was given the most important patient of the war was still ahead of him. He had seen Lincoln once before, as Lincoln made an address from the balcony of the White House. A few days later on Friday, April 14th he heard that the President and General Grant would be attending Ford’s Theatre. After completing his duties for the day he left for the evening and changed from his uniform to allow himself to more easily navigate Washington D.C.


Seated 40 feet from the president he was there as Lincoln and his party arrived. After Lincoln was shot and chaos and panic set in, word was sent for a surgeon. Dr. Leale leapt across the seats and arrived at the door to the box. Booth had barricaded the door and Major Rathbone, who was wounded, struggled to open it. Upon entering the box Rathbone asked him to attend to his severely wounded arm. After quickly realizing that the wound was not fatal, he moved to Lincoln, who was slumped in his chair.


Dr. Leale took charge of the situation and spent the entire night caring for the president. He requested to have the president moved to a house across from the theatre. Leale stayed with him until he pronounced him dead at 7:20 the next morning. Dr. Leale wrote about this photograph:


“Among my relics I have a photograph taken a few days later in full staff uniform as I appeared at the obsequies. The crape has never been removed from my sword. I have my cuffs stained with the martyr's blood, also my card of invitation to the funeral services, held on Wednesday, April 19, which I attended.”


Dr. Leale returned to his work as a surgeon, forgetting his moment in history, until the 100th anniversary of Lincoln’s birth when he finally wrote “Lincoln’s Last Hours” for a speech he gave to the Military Order of the Loyal Legion of the United States in February 1909. Dr. Leale would live another 23 years until his own death at the age of 90 in 1932.
© History In Full Color
User Agreement
Cancel
Continue