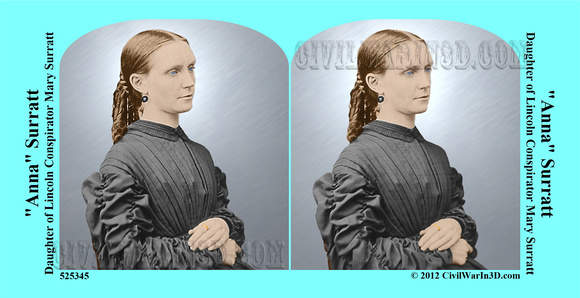 Born in 1843, Elizabeth Susanna Surratt was better known as “Anna”. When she was nine, her father purchased 287 acres of land that became known as Surrattsville (now Clinton). He opened a tavern that served as a polling place, post office and part time hotel. The Surratt’s home became the destination for those wanting to discuss current politics of the day. It was not a secret that the Surratt’s favored the Confederacy when war broke out in 1861. The following year Anna’s father died of natural causes. With the war crippling the family business, Mary, Anna’s mother, struggled with the debts left by her husband.


Surratt rented the tavern and opened a boarding house in Washington D.C.. It was here that the family encountered John Wilkes Booth. After Lincoln’s assassination, both Mary and her son John Jr. were suspected in connection with the murder. While John Jr. escaped, Mary was brought to trial and hanged on July 7, 1865.


At the age of 22, with both of her parents dead, her brother on the run and another brother not having returned from serving in the Confederacy, Anna’s life was caught in a turmoil that continued for the rest of her life. Pressured to sell the home to pay lawyer fees, both the boarding house and tavern were sold by 1869. Anna, wanting to live a quiet life, moved to Baltimore and married William Tonry. A chemist in the Surgeon General’s office, Tonry, by coincidence was working in Ford’s theatre, which had been converted to offices. Four days later, perhaps as some sort of act of retribution, the War department fired Tonry.


Things did become quiet until 1880. By this time Anna had two children and had melted into the Baltimore scene. During the election of 1880, Winfield Scott Hancock was nominated for President. A slight connection between Hancock and Surratt was broadcasted. In 1865, it was Hancock that had arranged for a relay of riders between the White House and the site of hanging, in case President Johnson chose to suspend Mary’s sentence. The Republicans exploited this link to help defeat Hancock. While Anna never spoke of it, her husband stated “that the republican party is responsible for the murder of Mrs. Surratt”.


Afterwards, Anna was finally able to live out of the public’s glare. She had two more children and lived to the age of 61. Anna was buried in an unmarked grave next to her mother.
© History In Full Color
User Agreement
Cancel
Continue