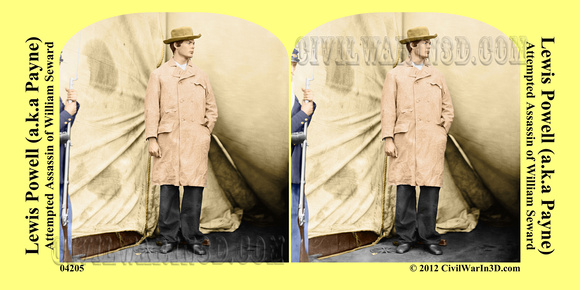 Lewis Powell was hanged for his attempt to assassinate Secretary of State William H. Seward. The attempt was part of a larger plot to throw the federal government into chaos, a few days after General Lee’s surrender, by assassinating President Lincoln, Vice-President Andrew Johnson and Secretary of State Seward.


From his childhood, Powell would seem to be an unlikely assassin. Powell was the youngest of eight children. His father, George Caldwell, became ordained as a minister when Powell was three years old. After his father was ordained, the family moved from Alabama to Georgia. Powell’s enjoyment of nursing and caring for sick animals lead his siblings to give him the nickname “Doc”. His prominent left jaw was the result of being violently kicked by the family’s donkey when he was 13.

The family moved to Florida when Lewis was 15. At the age of 17 he enlisted in the 2nd Florida Infantry. Powell went on to fight at numerous battles. It wasn’t until the Battle of Gettysburg that he was wounded in the wrist and spent a few months as a prisoner of war before he escaped.


Powell became involved with the Confederate Secret Service around 1864. John Surratt introduced him to Booth. Booth recruited Powell, along with the other conspirators, into kidnapping President Lincoln as an exchange for confederate POWs. Booth later turned the kidnapping plot into an assassination plot.
Powell was tasked with assassinating Seward. He gained entry into the house by claiming to be delivering medicine to Seward, who had been injured in a carriage accident. Powell brutally stabbed Seward repeatedly. Seward’s life was saved by the jaw splint that deflected the blows from his jugular vein. During the attempt, Powell injured Seward’s two sons, August and Fredrick, his assigned military nurse, Sergeant George F. Robinson, and messenger Emerick Hansell.


After hiding out for three days, Powell went to Mary Surratt’s boarding house, while she was being arrested for her part in the assassination. As both Surratt and Powell gave conflicting stories, Powell was arrested and taken to the Navy Yard. The evidence against Powell was overwhelming and he was found guilty. Lewis Powell was hanged with the other conspirators, Mary Suratt, David Herold and George Atzerodt on July 7, 1865, at Fort McNair, in Washington D. C. Impressed with his courage the hangman remarked “I hope you die quick.” Powell replied “You know best, captain.” A hundred and twenty seven years later his skull was discovered in the Anthropology department at the Smithsonian. In 1994, it was re-interred next to the grave of his mother.