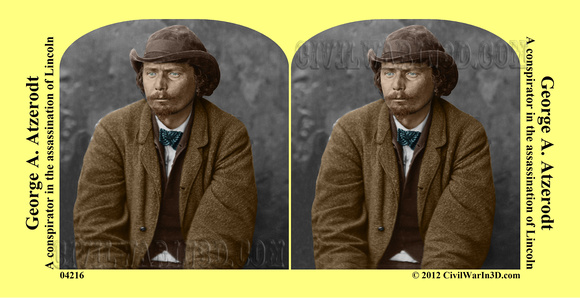 Had he succeeded, Atzerodt would have been known as the assassin of Vice President Johnson. Instead he lost his nerve, got drunk and never attempted to kill Johnson. Born in Germany, in 1835, he emigrated to the U.S. at the age of eight. He ran a carriage repair shop in Port Tobacco, Maryland and otherwise would not be remembered if it had not been for Booth.

Atzerodt had agreed to help kidnap Lincoln. His knowledge of the back roads was considered an asset. When those plans failed, a new scheme to throw the Federal Government into turmoil by assassinating the top three individuals was made. Booth gave Atzerodt the task of assassinating the Vice President. He checked in to the same hotel that the Vice President was staying and waited for the time Booth had selected. While he waited he began to drink in the hotel bar. After several hours he lost his nerve. Instead of approaching Johnson he began to wander the streets aimlessly.

Following Lincoln’s assassination, the bartender remembered that Atzerodt had inquired as to Johnson’s whereabouts and reported him to the police. A search of his room revealed a revolver and bowie knife (presumably for his assassination attempt). In addition, possessions of Booth's, including a bank book, helped to connect him to Lincoln’s death. Arrested a few days later, Atzerodt was tried and executed along with Mary Surratt, Lewis Powell (aka Payne) and David Herold. Today he is buried under the name “Gottlieb Taubert”, in St. Paul’s Cemetery, in Baltimore.