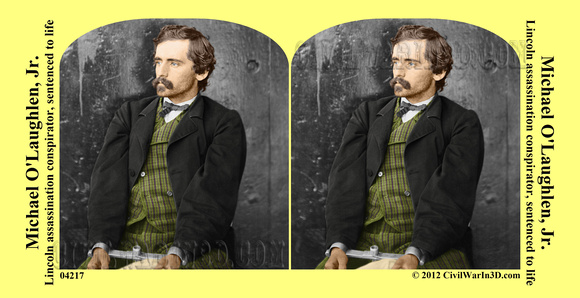 Michael O'Laughlen (pronounced Oh-Lock-Lun) was a lifelong friend of John Wilkes Booth and grew up across the street from the Booth family. Twenty one at the start of the war, he was working as an engraver but quit to enlist in the Confederate Army. Discharged in June of 1862, he worked with his brother in a feed and produce business in Baltimore.


O'Laughlen became a conspirator in 1864 with the plot to kidnap Lincoln. After months of planning, the attempt came on March 17, 1865, when Lincoln was scheduled to attend a play on the outskirts of Washington. The plan was thwarted due to Lincoln changing his plans at the last minute. After the attempt failed, O’Laughlen returned to Baltimore.


Further strategies to kidnap Lincoln were abandoned in the planning stages and O’Laughlen ended his participation. When the scheme changed from kidnap to assassination he was not involved. He did, however, return the day before the assassination. The government tried to claim at the trial that he was planning to kill General Grant. Unable to prove their case, O'Laughlen was sentenced to life in prison for his part in the earlier plot to kidnap the president.


O'Laughlen was sent to Fort Jefferson in Florida, along with the other conspirators sentenced to prison terms. Two years later he contracted yellow fever. After four days he seemed to be recovering. However, he collapsed suddenly that night. Dr. Mudd, also charged as a conspirator, stayed with him through the night until he succumbed a few hours later. He is buried in Baltimore in the same cemetery as John Wilkes Booth and fellow conspirator Samuel Arnold.