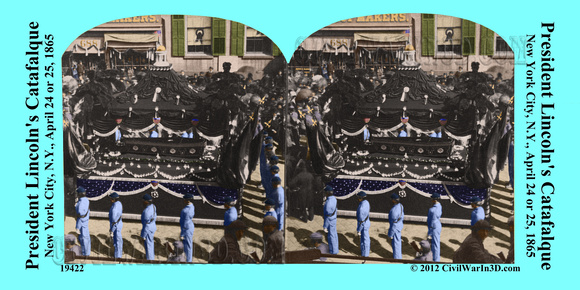 For most, a funeral is a one-time event. For some, such as the President, there may be a national funeral in Washington and then one at the burial place. For Lincoln, however, there were not one or two funerals but twelve! Around 90 minutes after Lincoln’s death on April 15th, 1865, his body was moved to the White House. An autopsy was performed the next day. On the 17th, the body was moved to the East Room for viewing. Public viewing was available on the 18th during the day with a private viewing that evening.


During each stop the body was moved in a hearse to the viewing area. The catafalque seen here was only used in New York. The New York City Board paid undertaker Peter Relyea $9,000 to create the carriage that would be used for this one event. Accompanying the hearse was the New York 7th (known as the "Grey Jackets”) and the Veteran Reserve Corps in their distinctive sky blue uniforms.

Special thanks to Richard Sloan for his research and assistance on the color choices used in this image.
© History In Full Color
User Agreement
Cancel
Continue