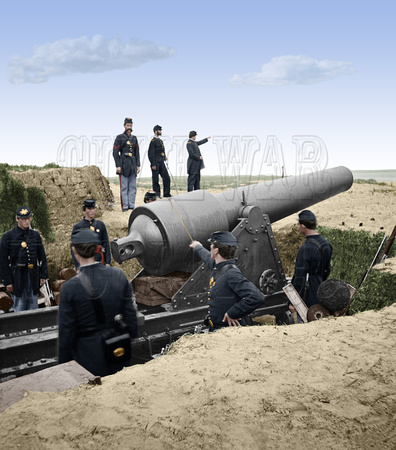 "Our battery work was mainly directed against ruined Sumter. Day after day we trained the mortars on that crumbling fortress, sending their 10-inch shells high in air, to drop into Sumter and burst."

Battery Chatfield was named after Col John Chatfield who lost his life during the July 18th, 1863, assault on Battery Wagner. The battery, located on Cumming's Point on Morris Island, was used by the Union to attack both Fort Sumter and blockade runners. It had two 100-pounder and one 300-pounder Parrotts and four 10-inch sea-coast mortars and two 10-inch columbiads.

A soldier of the 11th Maine describes the detail at Chatfield Battery during October of 1863:

"...After a shot was fired, it was watched through a field glass by an officer and its effect noted; whether it burst in the air or after striking its objective point, the men at work in the magazine filling the flannel bags each charge of powder weighed out was enclosed in receiving orders to put in more or less powder as the effects of the shots were noted, and those cutting fuzes receiving their orders to cut them shorter or longer from the same observations. As one officer observed the effects of the shots, another would note on a prepared form the results given him by the officer in charge of the firing, thus keeping a tabulated statement of each day's work, the number of shots fired, and their individual results.

Sometimes these results were plain to all of us. A shot would fall into the fort, and a whirl of flying fragments of stone, or a leaping barbette caisson, would tell us just where it had struck and just what the effect was. And a few times we succeeded in our incessant endeavor to bowl down the rebel flag. But, to the credit of the garrison of Sumter it must be said, no sooner was it down than some brave fellow would mount the parapet and set it flying again."
© History In Full Color
User Agreement
Cancel
Continue