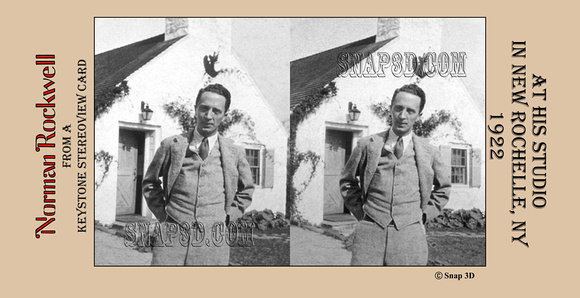 This 3D picture of Norman Rockwell is the only image of him that I am aware of that was taken with a 3D camera. It was taken by the Keystone View Company of Meadville, PA that made stereocards for the general public as well as special custom clients.


This image was probably intended for a private collection. Stereocards are like the cards seen by the boy in the Sphinx. It was taken in 1922 and the 28 year old Rockwell was well established by that time.


It was taken in front of his studio at 24 Lord Kitchener Rd. in New Rochelle, NY. Note the painter’s palette on the building in the background. Rockwell lived in New Rochelle at various locations from 1913 to 1939. Both “The Sphinx” and “Santa Asleep” that are available in our 3D collection were published that year of 1922.


All of the paintings in our 3D collection were painstakingly converted from flat images. Snap 3D has a license agreement with the Curtis Publishing Company to perform this task. We have converted 31 of some of the most popular of these Saturday Night Post images into 3D.


Norman Rockwell was born in New York City in 1894 and attended Chase Art School, National Academy of Design and Arts Student League for his early training. His first Saturday Evening Post Cover was “Mother’s Day Off” published on May 20, 1916. Over the years he made 323 covers for the Post. His last cover was a repeat of his 1960 portrait of John F. Kennedy published as a memorial edition on Dec 14, 1963.
He moved to Stockbridge, MA in 1953 and established the Norman Rockwell Museum located there. For fans of Rockwell it is definitely worth visiting. We have done 3D conversions of some of their collection. The original paintings for Triple Self, Golden Rule, Going and Coming, Art Critic, Freedom of Speech, Freedom from Want, Runaway, Outward Bound and Girl at Mirror are located there.