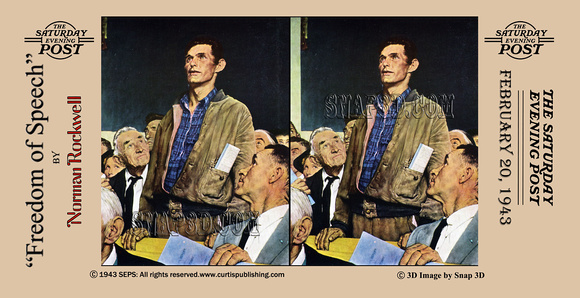 "Freedom of Speech" by Norman Rockwell in 3D


This was Rockwell’s favorite of the Freedom series.
For inspiration for Freedom of Speech, Rockwell recalled a recent town meeting in Arlington, Vermont where he lived at that time. He remembered how his neighbor, Arlington resident Jim Edgerton, had stood up during the meeting and aired an unpopular opinion. Instead of objecting to his remarks, his fellow citizens honored Edgerton's right to speak his piece. Even though his neighbors may have disagreed with his viewpoint. He was allowed to speak without interruption.


This picture was also printed on Office of War Information poster OWI Poster Number 44 O-510257.
The captions on the original war poster read as follows: "Save Freedom of Speech" above and "Buy War Bonds" underneath the illustration.


The Post published the paintings as a series after the United States government declined it.
Seeing the huge success of The Post articles, the United States government changed its mind about Rockwell's creations. Soon afterward, the Office of War Information later issued the series as posters as an incentive for War bond purchasers. Many of these posters are still sold today.


Rockwell's inspiration for the series was the Four Freedoms speech given before Congress by Franklin D. Roosevelt on Jan 16, 1941.
© Snap 3D
User Agreement
Cancel
Continue