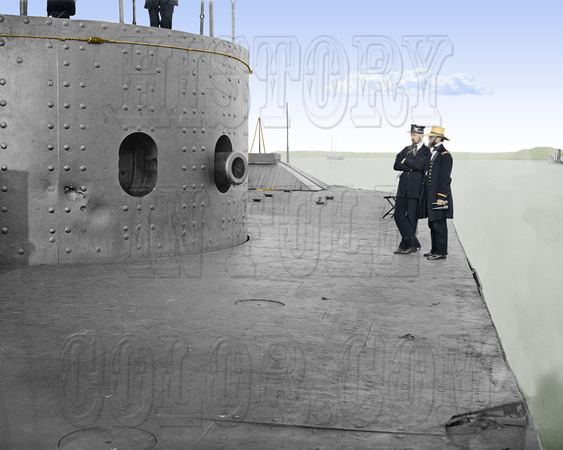 At the age of 17, he joined the Swedish Army as an officer and surveyor. He soon began to experiment with several inventions. By the age of 23, he had resigned from the Army and moved to England to pursue inventions. Ericsson had several inventions for engines which ultimately he applied to the train “Novelty”. Entered into a competition, “Novelty” was much faster than the rest of the entrants but lost due to mechanical problems with the boiler.

Over the next several years he continued inventing without any major success. When his plan for a twin screw ship was rejected, he was encouraged by Robert Stockton to move to the United States, which he did in 1839. Working with Stockton he helped to design the USS Princeton, probably the most advanced warship of its day. Ericsson’s temper strained the relationship with Stockton. By the time that the ship was completed, after three years of work, Stockton took primary credit for the ship and worked to push Ericsson out.

In addition to the engine and propeller, Ericsson had designed a revolving 12 inch gun to the armament. Stockton added a second gun of his own design but left out several key safety features incorporated in Ericsson’s gun. During demonstrations in 1843, Stockton’s gun exploded killing the Secretary of State, Secretary of the Navy and four others. Despite the fact that Stockton had designed the gun and took much credit for Ericsson’s work on the ship, he managed to blame Ericsson for the explosion, even convincing the Navy to refuse payment.

Bitter and angry, he continued his work on inventions. Even proposing an ironclad to the French Navy in 1854 that was never built. When the Civil War started, the South began work on the CSS Virginia as an ironclad ship from made from the hull of the USS Merrimac. The North began a race to produce its own ironclad. Cornelius Bushnell began a design that ultimately became the USS Galena. When he became concerned with stability on the ship he sought Ericsson’s advice. Still bitter with the Navy over the 1843 incident, Ericsson wanted nothing to do with the project. After much convincing, Bushnell got Ericsson to review the plans.

Instead of revising them, he proposed the Monitor. With its unique design Bushnell was impressed and convinced the Navy to fund the project. One hundred days later the ship had gone from the drawings Bushnell had seen, to a completed warship! The success of the Monitor spawned numerous other ships and is the legacy Ericsson is best known for. After his death in 1889, his body was returned to Sweden.
© History In Full Color
User Agreement
Cancel
Continue