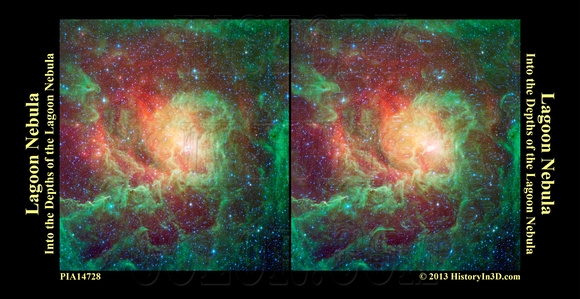 Into the Depths of the Lagoon Nebula - PIA14728

Swirling dust clouds and bright newborn stars dominate the view in this image of the Lagoon nebula from NASA's Spitzer Space Telescope. Also known as Messier 8 and NGC 6523, astronomers estimate it to be between 4000 and 6000 light years away, lying in the general direction of the center of our galaxy in the constellation Sagittarius.


The Lagoon nebula was first noted by the astronomer Guillaume Le Gentil in 1747, and a few decades later became the 8th entry in Charles Messiers famous catalog of nebulae. It is of particular interest to stargazers as it is only one of two star-forming nebulae that can be seen with the naked eye from northern latitudes, appearing as a fuzzy grey patch.


The glowing waters of the Lagoon, as seen in visible light, are really pools of hot gas surrounding the massive, young stars found here. Spitzers infrared vision looks past the gas to show the dusty basin that it fills. Here we see the central regions of the Lagoon with green showing the glow of carbon-based dust grains, and red highlighting the thermal glow of the hottest dust.


The various columns of dust all seem to point inwards towards the central depths of the Lagoon. These structures are being sculpted by the intense glow of giant, young stars found at the nebulas core. Within these clouds of dust and gas, a new generation of stars is forming.